I wrote extensively about my failed RPE experiment not too long ago.  I was pretty confident that I could combine an RPE system with a Sheiko program.  The problem was that it did not work.

The RPEs were too light for some days and too heavy for others.  You see, there is a nice flow with a Sheiko program.  There are some hard days that force the body to adapt, medium days that allow the athlete to maintain strength qualities, and lighter days for recovery.

The RPEs through this balance of hard, medium, and light days off.  Just because that experiment did not work, it doesn’t mean that it just ends there.  The idea behind using RPEs is very solid and works great for many.

I looked over what I was doing and made a list of the things that I liked about using the RPEs and the things that I did not like.  I liked being able to push the intensity a bit.  I think it drove confidence up with my lifters.

I did not like when the lifters drove intensity up on the small load days placed in the program for recovery.  Everyone ended up peaking too soon and we saw a dip in performance.  This is not something that we want to see happen before a competition.

I also did not like how each lifter would feel the need to do more weight each week.  At the end of the day I did not like how it put too much of the program in the lifters’ hands.  The system that we use does not work well with that setup.  Other very successful coaches use different systems when they apply RPE and it works great for them.  This is not saying RPE does not work because it does under the right circumstances.

I thought for a bit on how I could manipulate the training to include the good without the bad.  Kina had just competed in December and had no plans on competing anytime soon.  I have been coaching her for a while and trust her as an athlete.

I decided to try this idea that I got with her.  At the start of the training block about a month after the meet, 80% for 5 sets of 3 repetitions was programmed for Kina.  Her best squat at the time was 285lbs so this should have been completed around 230lbs.

I Facebook message with Kina real time as she trains and sends me videos.  230lbs looked pretty easy so we made the jump up to 245lbs.  This was difficult, but manageable, exactly how a hard day should feel.

She would continue to use 245lbs as 80% until I said otherwise.  After a few weeks 245lbs was flying around.  It was no longer a hard day, but more in line with a medium day.  At this time, we decided to keep increasing weight until the triple looked difficult.  She ended up working up to 275lbs for a triple.  She was so confident in her abilities at that time she asked to smash her first 300lb squat.  She did, and it was easy.  That was a 15lb all time PR at 20lbs less bodyweight in 3 months almost to the day. 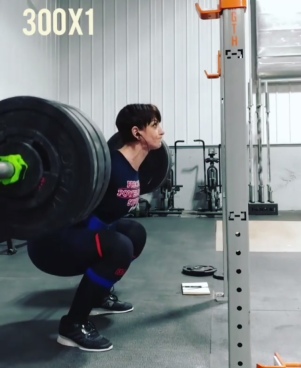 We did the same thing for bench and deadlift.  She missed 126lbs as her 3rd bench press at her meet but is repping out 135lbs currently.  Her 3rd deadlift was a pretty fast 287lbs at the meet in December, and yesterday she took 315lbs for fast doubles after 305lb singles on the deadlift with bands a couple days prior.

The other days Kina would just run the program as it was written.  This allowed us to push the intensity when it was appropriate and to back off and recover when it was necessary.  This has allowed Kina to stay healthy (knock on wood) while making some very fast progress.

Not only are there the recovery days in her program for her, but as she got more used to the heavier load it became less of a stressor as we moved through the weeks.  If we added weight each week it became easier, we could have run the risk of doing too much.

These sets at the beginning of a block where we set that 80% number to be used are going to be known as “Precision Sets.”  I thought it would be cool to use the name of our team in there and it is pretty fitting.

Some more of my lifters will be running their program with the “Precision Sets” in the very near future.  Kerry already got a taste with her bench press and we saw good improvement there at the Arnold.  Dave saw some big improvements in bench and deadlift as we pushed the intensity more than we had been.

One quick caveat, just because we have these Precision Sets, it does not mean that we definitely increase the weight.  Lots of times that 80% is right on the money and the intensity we are looking for.

I think there is much to be gained from a psychological perspective.  First time someone attempts heavy doubles and triples they get a bit nervous for that weight.  As they realize it is not so bad and it becomes easier, their confidence to hit bigger weights rises.

The stable weight also allows me to monitor the athlete’s progress.  If it becomes easier, I know they are getting stronger.  However, if the weight continues to be heavy, or even worse, begin to look closer to an RPE 10 than an 8 or 9 then we are pushing too hard and need to back off.  In this case we would go back to the true 80%.  If the athlete doesn’t feel well that is always an option as well.  However, if you are healthy and able and taking weight off, I think that tells me more about your character.

I am excited for this and the results that it can bring leading into Raw Nationals this year.  The gym is our lab, and sorry guys, team Precision are my lab rats.