The safety squat bar (SSB) is a barbell that has a camber at the end and a harness that sits on the shoulders in the middle. This is a very valuable bar to have in any gym, I am not arguing that. 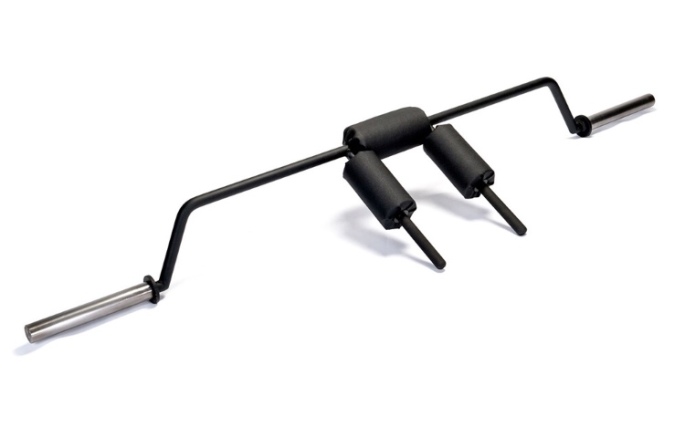 The harness makes it easier on the shoulders and elbows to load up a squat. This can come in handy with a field sport population, especially throwing athletes. However, I find it to be a suboptimal option for raw powerlifters.

Boris Sheiko is my coach, and the only powerlifting coach I have ever had. Since day 1 it has been drilled into me that technique is the most important aspect of training. The variations that are used in my program, and those that I use with my athletes, are to improve the technique.

For example, if the lifter has a “goodmorning” squat out of the hole, we may pause in that position. If the chest falls too far forward the athlete will not be able to pause in this position. This variation will teach them how to improve their positions.

Pin squats are another good option here. If the chest caves forward off of the pins the athlete will not get the bar moving. Again, this forces the athlete to correct their positions coming out of the hole.

When we perform variations they need to be as specific as possible to the competition lift to have maximal carryover. This means that we use our competition bar position, grip, and stance.

Other than being safer on the shoulders and elbows, some coaches and athletes will argue that the SSB will fix technique by building a bigger back and forcing the athlete to push back into the harness as the camber will pitch the athlete forward.

We are not trying to build a bigger back. We are trying to improve neuromuscular efficiency of the movement. We want the back and legs to work together as 1 unit. Many people that pitch forward in the squat have a deadlift that is far heavier than their squat. Their back is not weak, their technique in the squat is just poor.

The other problem with the SSB is it is not teaching the athlete how to stay upright in the competition lift. The law of specificity states that we adapt specifically to the stressor placed on us. In other words, we just get better at squats with the SSB.

The hand position, the way the weight sits on the back, and the weight itself sits very differently on the back. This does not have carryover to the competition lift as it is too different. In fact, I have seen the SSB actually make the pitch forward worse for a few athletes.

Alyssa, had this issue in the squat for quite some time. She ran a program that called for a lot of SSB squats. Her pitch became much worse and she actually saw her squat numbers slide backwards.

16 weeks ago, I began working with Alyssa. We programmed pauses on the halfway up in the squat, pin squats, and lots of volume with lighter weights to correct this problem. We also, changed the hand position a bit to get the elbows a little more under the bar.

15 weeks later she was very upright in the squat and hit a 20lb all-time PR. Alyssa has been lifting for 3 years so the increase in weight lifted is a lot. This was due to improvements in neuromuscular coordination, aka technique. Now that her technique is good we can start loading it more and more. A consistent lift will yield consistent results.

If you have an injury that disallows you to squat with a straight bar, the SSB is a better option than not squatting. If you are a field athlete, especially one that throws like a baseball player, the SSB is a great option. If you are a raw powerlifter stick with the straight bar in your competition bar placement, grip, and stance to build a more technical squat.